My Little Pretties and Some Dinner - A la Escargot

On Wednesday, May 25th I celebrated my 3rd wedding anniversary to Mr. D. In celebration of that, I can proudly say that I finally made my first pair of little pretties. 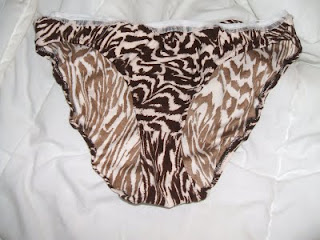 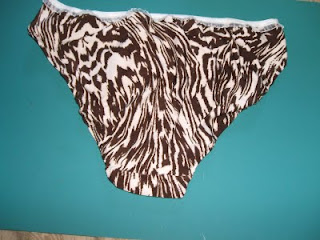 I think they turned out pretty nice, and they are very comfortable. 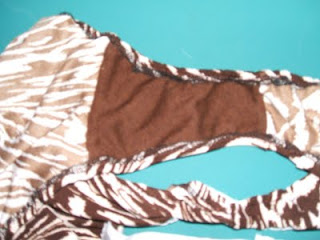 I used Antoinette's tutorial as per Kyle's suggestion. Thanks for the push girl!!! I can see more of these in my future especially since it's a great use for leftover scraps of knit fabric, and these days, I am just not liking the quality of underwear that is sold in the store. I'm not giving out any brand names, but I'm sure some of you know who I'm talking about. Now, I know I can be cheap at times, but when I put my money out for something, I expect it to last for at least a year. After a few washings, I've got threads coming undone or the fabric starts to ravel. I had one pair of pretties that I think I wore twice and the next thing I knew there was a hole in the lace.

I contemplated using my birthday coupon this year and thought twice about it. To the sewing machine I went. At least I know the quality of the fabric I purchase, and I think these turned out really good for a first effort.

Now I know it's a bit off to talk about food and underwear in the same post, but I'm going to go there anyway.

In celebration of our third anniversary, Mr. D and I went to Bistrot La Minette. 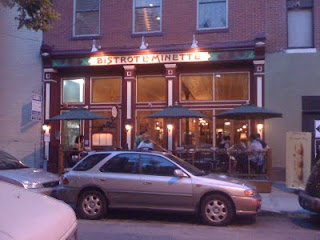 It is a french restaurant at 623 South 6th Street I believe between South and Bainbridge. If you get a chance and you are in the Philadelphia area and want french cuisine, check them out. The food is delicious and the staff are on point. This was our first foray into french cuisine and we loved it.

They were celebrating National Escargot Day on May 24th and 25th and we were celebrating our anniversary, what better mix could there be. We had never had escargot before and it was something that we both always wanted to try.

To start us off while we waited they brought out cheese puffs and warm bread straight from the oven. I could not get enough of the bread it was so good.

Escargot is a french delicacy. One of the main foods that snails eat are grape leaves so they are most often found in the wine producing regions of France. While escargot is normally served as an appetizer in France, this restaurant decided to feature it as a four course dinner to wet our appetites and treat us to smells and tastes that had you wanting more. And I really mean that. When we finished, we both felt we could have done the dinner all over again for a second time. 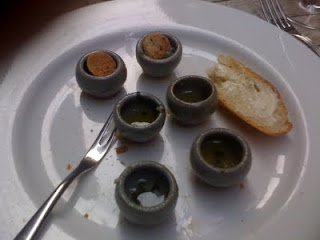 It is six burgundy snails, garlic herb butter and croutons 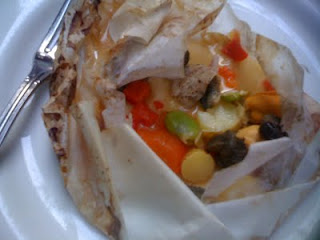 This course was Escargots, mussels, sardines, spring vegetables in a broth 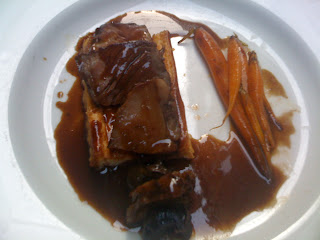 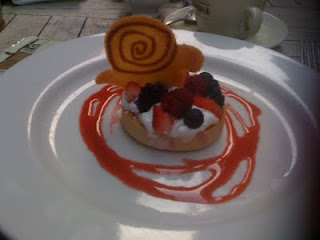 A dessert of berry tart, meringue and wild strawberry sauce.

They topped it off by bringing this beautifully garnished plate of sweets out to end our evening. 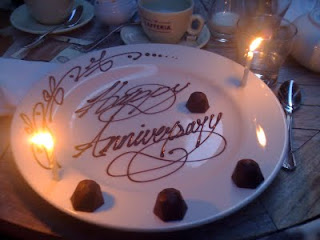 All in all it was a lovely evening that ended with a stroll down South Street before heading home.
Posted by Andrea at 10:00 AM

Happy Anniversary. If there's a fire at your wedding that's a sign the marriage will be smoking hot lol.

Happy Anniversary and I hope you have many more. Great minds must think alike because I pulled out a Kwik Sew pattern for "pretties" and plan to use the scraps for my last six projects. Lastly, if you come near my shoe closet I can't be responsible for what I'll do to you if I catch you! Not only that I wear a 9 1/2!

Great post! I loved the "pretties" and food combo. Too funny.

That menu sounded delish! I love french cuisine and escargot is sooo yummy. I spent a month in France and loved my time there. Next time I visit family in Philly, I will have to check out that restaurant.

I love your pretties. I've bought several patterns, but have yet to give them a try. Mmmmmm this might be good inspiration for me. Happy anniversary too.

Congrats Andrea on your first pair of underwear and your third anniversary! You'll be addicted to making more undies!

Girl, you nail that lingerie making technique. And that anniversary meal is making me hungry. Lol

I received my stretch lace from Sew Sassy and looking forward to making more little pretties. If only I can finish my dress challenge.

Happy Anniversary! I am speechless at your talent! Your "little pretties" are so cute! I only wish I could sew! Keep up the fantastic work.