These Boots Were Made For Walking!!

And that is exactly what I was doing on Friday after I woke up to this. 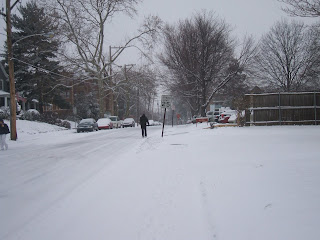 I want to thank everyone for all the encouragement on the designing. I'm not giving up, and will continue to keep submitting in the future.

In other news, I went to an ear, nose, and throat doctor on Wednesday. He took me off of all my sinus meds and put me on an inhaler, and I have to use my neti pot (Thanks guys for telling me about it. My doctor's a big advocate of the neti). He also told me that I am suffering from strained vocal chords. I never rested my voice after getting that throat infection in December, so now I'm dealing with the aftermath. I have to go back and see him in 3 weeks. Until then, I have to keep the talking to a minimum. I had a singing gig Saturday night, which he aloud me to do, but it had to be the last one for a while. It's actually convenient, as I don't have another gig for a few weeks. I'm learning how to mime pretty well, and having fun with it.

Since I've gotten that bit of news out of the way, on to the good stuff. I've been busy making these. 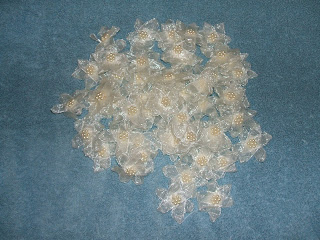 I saw them at JoAnn Fabrics and they only sold 2 in a pack and I needed 60 of them so lets just say I've been busy for the past 2 weeks.

I finished the last Half-Pi Shawl I need for the wedding. I started working on the shawl collar sweater again and got the sleeves done this weekend. I sewed the shoulder seams together and pinned in the sleeves yesterday. This is what it looks like so far. I only have to do the collar now. I can hear that Cece Peniston song Finally, in the distance now that I'm in the home stretch. 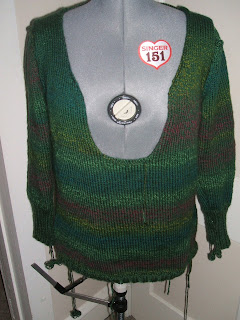 I also started a new project Friday night. It's the Minimalist Cardigan from the 2007 Fall Issue of Interweave Knits. The pattern is a moss stitch. I'm using Cestari from Chester Farms (From my stash yah!!!). The yarn is 75% Cotton, 25% Wool. (Yes, I know it's got wool in it. As long as it's a minimal amount, I can wear it.) I'm using #7 needles to knit this baby up. 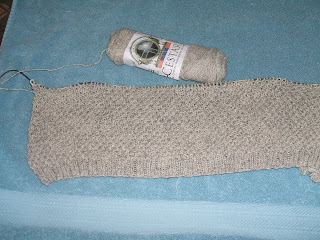 With Spring around the corner, I want something to wear to take the chill off.

In sewing news, I want to cut out the muslin for curtains for my mother's kitchen area. I also need to alter 2 dresses for my neighbor. It's not something that I'd usually do unless it was for myself but she's very nice and looks out for my mom when I'm away.

I was listening to one of my weekly WEBS podcasts a few weeks ago, and they had a woman on by the name of Christy. She's working on a project called The House That Yarn Built. She's asking for donations as little as the cost of a ball or hank of sock yarn. The money in turn will be put toward building a home for someone that is still homeless in the Lower 9th Ward of New Orleans. It's part of the Brad Pitt Project, Make It Right. Please check out the site if you're interested. I think it's a good cause.

I'm sitting here relaxing and thought I'd blog for a spell. I finished this last night. 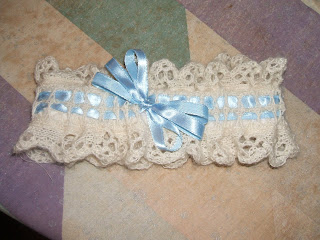 
I am very pleased. Thursday night I got home, fed the dogs and got to work. I wet blocked the lace then starched one side. That freaked me out at first because I'd never starched anything I'd knit before. I tested a piece first to make sure it wouldn't ruin the yarn, and it was fine. When I woke up yesterday I checked it out and felt it wasn't starched enough so I flipped it over and starched the other side. That did the trick. On the way home yesterday I forgot to stop at Joann's and pick up some bias tape so I made my own with some muslin that I had on hand. It's pretty easy. All you have to do is cut the material on the bias.

I pulled the sewing machine and iron out and got to work. I have to admit, I love the outcome. It's a beautiful keepsake to remember my day by.

After working on this project, it's really peaked my interest to get back into sewing. I ordered one of the books I told you about the other day from Amazon, Sew Everything Workshop. 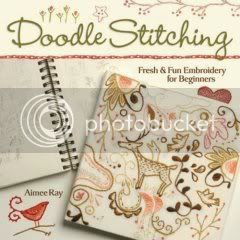 I want to make a keepsake quilt for the fi and I, and I'd like to incorporate some embroidery into it. I've also bought a couple of things from the Sublime Stitching website. I think Jenny Hart is awesome, and she does beautiful work. She made embroidery cool.

I'm almost finish the half-pi shawl. My newest design is coming along nicely. I don't have any other knitting updates right now, but hopefully I'll have more after the weekend.

Thursday night when I got home, I received my first rejection letter. I submitted a design to Interweave Knits back in August for their Summer '08 issue. I'm not upset about it, and it was a good experience. I will definitely submit again. As they say, if at first you don't succeed, try try again.

Lastly, I received this award from the amazing and very talented Amanda.

Thank you girl, you always make my day!! Amanda and I submitted our first designs almost around the same time, and we support each other through the process of having to wait with baited breathe to see if we got accepted or rejected.

The rules are to give the award to up to 10 people whose blogs bring you happiness and inspiration and make you feel so happy about Blogland! Let them know by posting a comment on their blog so that they can pass it on. Beware! You may get the award several times!

Here are the 10 people that make my day or inspire me:

That's it for today. I hope everyone has a lovely weekend.
Posted by Andrea at 11:41 AM 9 comments 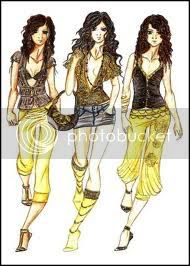 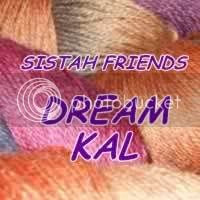