Updates, an FO and a Review!!

How was your weekend? Mine was a little busy. I hit Joann Fabric on Friday night and Saturday Morning. They had a sale on McCall and Vogue patterns. I'll update you on that some time this week as I intend to do some cutting tonight and hopefully some sewing by tomorrow. We'll see.

I also had to go to a memorial service yesterday after church. It was the second death I had to deal with in a week. The family asked me to sing, which of course I did. I've sung at funerals before and they are usually very hard. But this one was good. I actually got through the song. Gloria, that's her name lead a wonderful life and saw a lot in her 91 years.

In other more uplifting news, I finished the Baby Jacket with Moss Stitch Edging. YIPPEE!!!! The girls in my knitting group will clap at this, because they know that this was a project that dragged for me. I kept putting it down, and baby Noah came 3 weeks early so you know I needed to get it done. 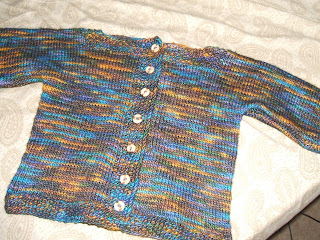 The yarn is Manos Silk Blend on #3 needles.

I also started the Cobblestone Pullover for Mr. D. At our reception he actually said to me. "Since I married you, can I get my sweater now?" I laughed of course because it was our wedding, and all he could think about was his sweater, and told him yes. So far it's an easy knit. I had more of the Cestari (this one is a cotton, wool, and silk blend) in a blue tweed and it was the right gauge. 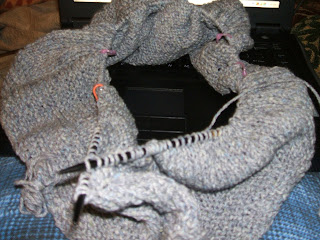 I've been working off and on on the pattern for Victoria. I pretty much have it written out. I just need to swatch 2 of the patterns in the round to check something and then it will be done, so hopefully I'll have that up soon. I've learned a lot with this pattern and sizing which I thought was very cool. I also started another design. I hope to have tidbit pics soon so please stay tuned.

I've been getting myself ready to teach this finishing class at the end of October (This one's for you Sheila). In doing so, I found this at my local Staples store of all places. I figured why not, it's only $20, and how could I go wrong the dude from Oxy Clean was do the commercial. Let me tell you, the Steam Buddy is ALL THAT!!!! I LOVE IT!! I've been using it more than my iron. It even took a chocolate stain out of Mr. D's suit. I loved it so much, I went out and bought another one.

From time to time I go and hang with the Philadelphia Sewing Collective in when they have the sewing cafe. They meet once a month an sew. It's cool. I been there 2 times, and I did a sewing outing with them last spring where they took us around fabric row in Philadelphia. Anyway, not to change the subject. I got an emailed the other day with a link to the Thread Market. I thought the deal they had for 17 cones of thread which hold 4,000 yards of polyester thread for only $7.15 was a steal. Also, each cone is a different color. They also have another deal for 20 cones at $11.00. If you like, check it out.

I thought I'd leave you with this picture. Can you guess who it is? 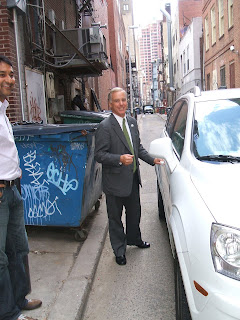 A little over a week ago I was on my way back from lunch. Vice Presidential Candidate Joe Biden was coming out of a near by building. I hurried to catch up to him as you can see he was just getting into the car to leave. I asked if I could take his picture and he said sure if I hurried.

Have an awesome day and week!!
Posted by Andrea at 2:04 PM

HOW COOL WAS THAT!

The baby sweater came out adorable and love the colorway.

Looking forward to your DH's sweater, I may just get inspired and do one for my DH...lol.

Hey girl! You have been very busy. I'm enjoying sseeing all of your sewing, and am glad that you completed that baby sweater finally. It looks great.

Sweet that you sang for Gloria's funeral. I'm sure her family really enjoyed it. Song has a way of lifting you up on times of sadness.