Can It Get Any Worse

I've been trying to decide if I should talk about this because I usually don't talk about private things on my blog. But I figure the more prayers we get, the better.

On or about my last post, my husband and I found out that his mother had an aneurysm in her brain. She is doing okay right now. She went through one procedure that week and has to go back in 4 weeks. At that time they'll shoot coils into the aneurysm hopefully taking care of the problem. She did suffer some short term memory loss from the first procedure but she coming along.

A week after this took place (last week) I got really sick with a sinus infection. They also thought I had the flu, so per doctor's orders, I couldn't leave my house. Now to make matters worse, my mother didn't answer her phone on Monday so I drove over there, and thank god I did. Her blood sugar was through the roof(she's a diabetic) and she had also suffered a heart attack. It was a little crazy at first and they didn't know if she was going to make it. She is now doing much better and getting stronger every day. I know this of course by her attitude towards me.

Through all of this, I've gotten some knitting done, but I can't show it because it's a sample item for the December issue of Knit Picks. I can tell you that it's beautiful and I want a set for myself.

Last Saturday I made a window treatment for my bathroom window. Do you ever have that problem where you buy a shower curtain, and you want a matching window curtain, but they don't sell them? Here's an easy solution. Buy an extra curtain, and make one. The curtain looked like this 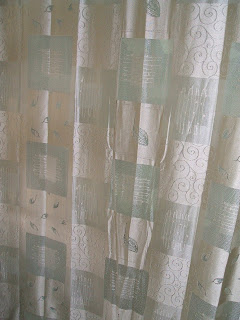 and here's the end result. 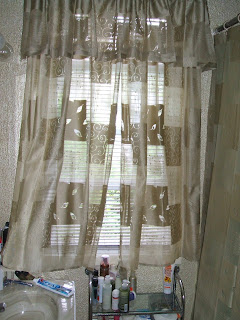 My second project last weekend dealt with my mother. When I travel with my mother, we usually bring her wheelchair. It just makes things go faster. We purchased a traveling wheelchair the other day but it didn't come with a cushion, so I made her one. I measured the chair dimensions, went to JoAnns and purchased some foam. I used an electric knife and cut the foam to the size I needed. I then went to Home Depot, I purchased some boarding for the base. Had that cut there to the size I needed. Last Saturday I put the foam on the boarding. Covered it in batting, 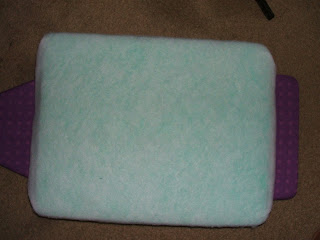 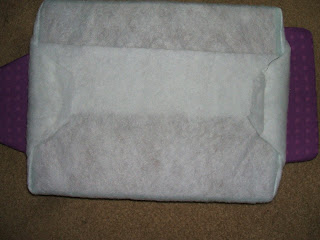 and this morning I covered everything in black duck cloth and stapled away. I think it turned out okay. 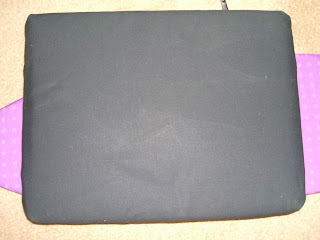 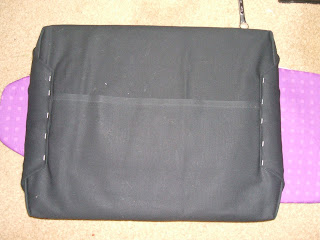 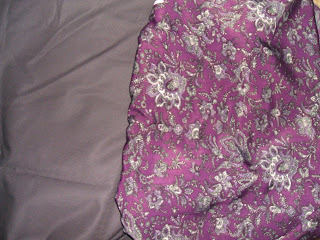 I thought I had found my buttons as well, but now that I've found the lining, I'm going back to the drawing board on that one as they do not match. These buttons were in my stash. Believe it or not I purchased them at The Dollar Store. Here are pictures of the front and back of the buttons. 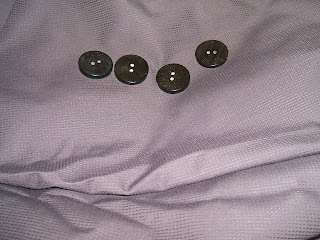 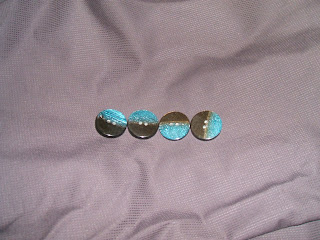 I'll probably go back to JoAnns or take a trip to 4th Street in Philadelphia to see what I can find in the near future. Between today and tomorrow, I want to make another attempt at cutting out the pattern pieces or at least start to cut them out. After that I want to start my muslin.

I did cut out the pattern pieces for Butterick 5030. I need to iron them and cut out my fabric. I also plan on cutting out McCalls 5978. I'll have to see how much I can get done this weekend. That's all that going on right now. I hope you all are doing well.
Posted by Andrea at 12:50 PM

You're right...more prayers for your MIL are needed. And you have my prayers. Thank goodness you went over to check on her!

You know that you are all in my prayers. I hope yesterday was successful.

Not sure how you are keeping up with all of these projects, but maybe that is what is keeping you sane.

Sending out huge prayers for your family and despite all of that you are still able to craft. That's a superwoman...lol

The cushion came out great and glad you are enjoying your curtain & shower curtain set.

I will keep you and your family in my prayers, great projects to take your mind off things. The cushion is awesome, don't you just love your staple gun.

You and your entire family are in my prayers. I'm glad your MIL and Mother are both doing better.

No problem at all adding you and your family to my prayer list. Even with everything you have going on you are being quite productive.

I will definitely send prayers and positive intentions to you and your family. I know this really worked for my FIL when I told everyone about the problems he was having. Seriously, I think that is what turned him around. Sorry things have been so tough lately.

On a lighter note, I like the curtains, and your new blog banner!