Soup for a Dreary Day and a Knitting Review

There is nothing like soup for the soul and on a dreary day like today, I thought a bowl of soup was in order.  I wanted it to be hearty, so I went with a chicken and kidney bean soup with kale. 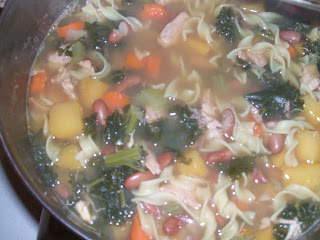 I wasn't sure what it would taste like as I was winging it, but I can now say two bowls later, it was pretty good and I would make it again.  If you're interested in the recipe, let me know.

In my year end round-up for 2012 I showed a picture of the Lace Caplet I knitted from Vogue Knitting Spring/Summer 2010. 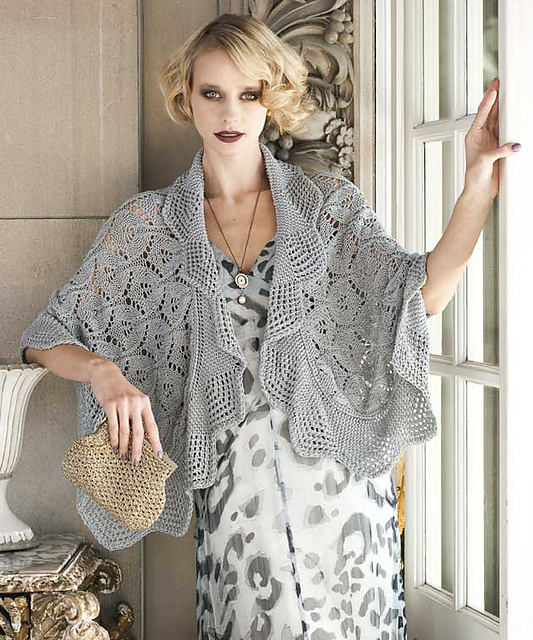 I first saw this pattern when a friend of mine loaned it to another friend and she was giving it back. I thought it was a lovely caplet that would be great for a cold day to keep the chill off. I had not been doing any serious knitting, and it was a great project to get the fingers moving and it refreshed my love of knitting. I'm now working on the Rib and Cable Cardigan from Vogue Knitting Fall 2009 and I'm loving it.  I'll have pictures to show soon.

Mmmm. Looks good. I got lazy and made tuna sandwiches.

so pretty and it looks great on you

Thank you Lori and Adelaide.

I'm always envious of your knitting! The shawl is so pretty!

Soup and knitting or any type of needlework are a perfect combination. Lovely shawl.

What a cosy post! My husband makes what he calls "garbage soup" which starts with kale and kidney beans and then he adds whatever "garbage" is in the fridge - leftover chicken, sausage, crushed tomatoes, whatever veggies... It's one of my favorites!

Beautiful capelet in one of my favorite colors!

I love any bean and kale soup, yours looks yummy!

The capelet is gorgeous! People need to stop posting cute things that tempt me into thinking I can do yarn crafts. No more hobbies!

That's so pretty, I have that issue. So many projects but so little time. Love the color and that soup looks delish.

I really live that caplet! The color is beautiful!