I've been going through some crazy stuff/issues at home and because of that, I haven't felt much like doing anything. Last Saturday I completed a skirt but I'm saving that for another post since I haven't taken a picture yet.

I finally wore Butterick 5247 to work last Wednesday and got lots of compliments. 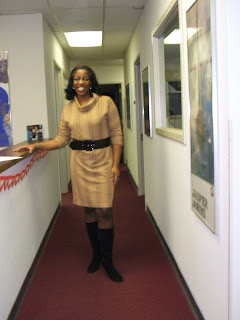 My one co-worker that knew I made it told me I did a fantastic job. She said it looked store bought. I think the fabric print was the major hit though. You can find my review here.

This weekend was definitely a sewer's weekend. I hung out at JoAnn Fabrics twice, and made it over to Fabric Warehouse for their 50% off sale. Yesterday I decided to make this dress at the last minute to perform in last night. It Butterick 5211 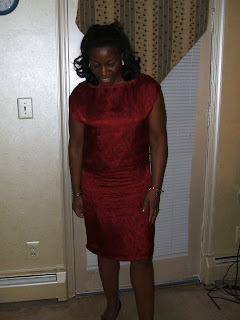 Please excuse my appearance. This picture was taken after singing, dancing and sweating the night away with my band. I just finished my review on pattern review which you can read here.

On Friday, I purchased the 10-2008 Burda Magazine from Sew Baby. I owe Mimi a huge thank you for giving that info out last year on her blog. I don't have a subscription to this magazine as I like to buy it by the issue just in case there's an issue I don't like. For some reason, the October issue never made it Borders. I haven't seen the February 2009 issue yet. I hope that's in the book store soon. I saw the preview the other day and think it's one I might want to purchase.

Now, with all this sewing going on, do you think I have had a chance to get any knitting done? You and I both know the answer to that one. Right now I'm concentrating on this. 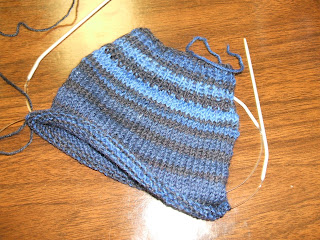 I have a few more things in the works, but I'll save it for later. Plus I haven't taken any pictures. It's about 1:15 am and I've got to go to work tomorrow, so I'm going to call it a day/night, or whatever. I'll talk to ya'll later. By the way, I want to thank Judy for also giving me the Kreativ Award. It's the second time I've gotten this award. If you have not read her blog, you need to. This woman can knit and crochet her butt off. She is amazing!!!
Posted by Andrea at 11:56 PM

Wow, thats a lot of sexy for 2-hours!

You are sooo talented! The dresses looks fab, and I've just checked out your band- very nice music!

Really love the 5247 dress! It looks great on you.

I'm wearing my 5247 Tunic to work today! Great fabric choice on your version!

You look just great! I'm getting your next shipment together - I'm so excited about the goodies I've been putting together for you; I wish I could be a fly on the wall when you open it up....

I hope you had a lovely Valentine's Day and I'll be in touch again soon.

Your dress looks great!! Where is the Fabric Warehouse that you mentioned in your blog?

The dresses and you are gorgeous. Great job!