Before I get started on this post, I just want to thank you all for the lovely comments you left me on my last 2 posts, the Sea of Love Dress and the Alice and Olivia dress refashion.  I worked very hard on both dresses and it was nice to see the final outcome on both dresses and like them, because sometimes,  I'm not always sure about some of the choices I make. This time, I can gladly say that everything worked out well.

I wanted Mr. D to match me at the wedding so I stopped at Jomar a couple of months ago during an awesome sale they were having and got the shirting I used to make his shirt.  I think I paid either a $1.00 or $1.50 a yard.  The shirting is a cotton fabric that does wrinkle easily, but he doesn't care and loves it. 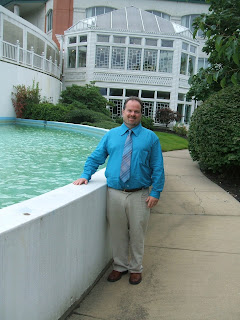 Karen told me about this pattern, and at the time I purchased it, Kwik Sew had been purchased by McCall Pattern Company.  The pattern was discontinued or stopped for a time.  I first purchased it through Amazon only to receive an email stating they couldn't send the pattern to me.  I then went to Fabric.com and they only had 2 copies of the pattern left.  I got one of the 2 patterns.  I'm happy to say one year later that the pattern is now available again and you can even download it as a PDF on Pattern Review. 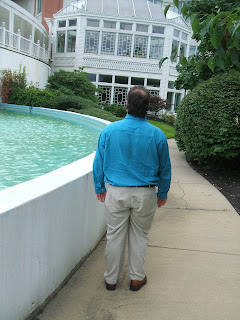 This was my first time doing a cuffed shirt for my man, and I enjoyed making it.  I've made a short sleeved shirt for him before using another Kwik Sew pattern .  The process was pretty much the same except for the cuffs, plackets and neckband.  The plackets were the hardest part for me, but I figure, I can only get better at them as I make each new shirt that he requests, and yes, there will be more. 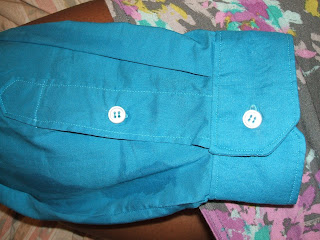 (Sorry the shirt's a little wrinkled.  I tried to steam it a little, hence the water mark.)

He's been approving fabric and telling me what he wants.  I have really opened up a can of worms here. This is an awesome pattern to work with and if you need a shirt pattern for your man, get this one. 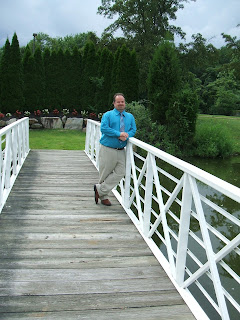 You will not be disappointed   Mr. D just loves the fit.  If he's happy, I'm happy.

On to the next project.  By the way, has anyone seen a pattern for a mens' knit polo shirt.  I've been looking and haven't found one yet.  I getting ready to cut up one of Mr. D's polo shirts now to make a pattern.
Posted by Andrea at 11:27 PM

Great shirt and Mr D looks very handsome in it too! Go Mr. D! I love making things for my hubby too and have this Polo pattern I've not made yet. It's Kwik Sew 3137. It appears easy enough, I just haven't gotten around to it yet.

Great new shirt for Mr. D, he looks great. I think you might be very busy with custom shirts!

Nice shirt! Great color on Mr D! I really need to get around to making some shirts for my Phin soon...

He looks so GQ in that last picture!! As I commented on your last post, you have opened a huge can of worms. A little secret though, if your husband is anything like mine, he will be the best person to sew for. I can do no wrong in my husbands eyes:) He loves every shirt I make for him.

Great shirt. I've been wanting to make shirts for my husband. I think I'll pick up this pattern. TFS

I am impressed! Mr. D is looking fine - love that you guys got a fun night out. xoxo, Mariss

great shirt-found the pattern online in an auction. The placket looks very professionally done as does the rest of the shirt.I'm sure your dh is very pleased.

Very cool collection thanks for sharing with us...