Well, it's been a while. I've been spending most of my time on Ravelry, listening to podcasts (they're great to listen to while knitting), and finishing up my sample knit for KnitPicks.

Ravelry is lots of fun. There is so much to do and it is very time consuming. I still have not put my stash on it yet. I keep freaking out about all the pictures I have to take. It's definitely a work in progress.

I don't know about anyone else, but I love listening to podcasts. A lot of them are very informative and entertaining. There are things from teaching different and new techniques, book reviews, yarn reviews and designer interview, just to name a few. There is always something new that I've never heard of. Case in point, I was listening to Episode 12 of Knit Picks and they were teaching the technique of Steeking. I was like what's that? Here it is, it's the art of knitting a sweater in the round and instead of doing the decreases for your armholes, you just knit your garment straight up, (knit a tube) and then cut your armholes out with scissors after sewing in a few stitches with your sewing machine to protect yourself against those live stitches. It's a useful technique to learn and can be used in many different ways.

Say for instance you have a pullover that you weren't too crazy about. Pull out your sewing machine. Stitch down the front of the pullover 2 times and then cut down the center in between the 2 stitches. Fold back the area or pick up the lives stitches and either knit or crochet a border down the 2 front pieces on the edge and you now have a cardigan.

A co-worker of mine had asked me to knit a few caplets for her grand daughters a while back. She gave me their measurements fully aware that they were much larger than the sizes the girls actually were. She wanted them to be able to get a couple of seasons out of them. When they put the caplets on, the girls were floating in them. I didn't want to knit the caplets over, so I pulled out my sewing machine, sewed a couple of lines where their arms could come through, added an extra button at the neckline and the caplets were salvaged. Eunny gives a good tutorial on her blog on steeking as well as Knitty and Elizabeth Zimmerman's Knitting Around. 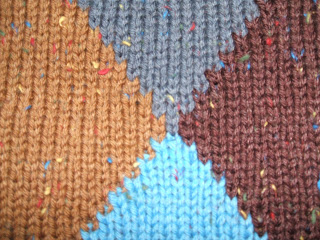 I'm shipping it off on Monday. Yippee!!!! I can get back to my shaped lace tee from Knitting Lingerie Style. I want to wear it while I'm in Florida at the end of the month.

I also just signed up for another Knitalong, hosted by Robin of course. She's great!!! This time it's for Teva Durham's book Loop-d-Loop, and Loop-d-Loop Crochet. I don't own the crochet book, but it's on my list. I can't wait to cast on, but I guess it would help if I picked out a project first.

I love listening to podcasts too. For my job, it's nice when I can listen to podcasts, so I' msigned up for quite a lot. I like the More Than an Apron. I saw Tunic on Carrie's blog, but didn't really care for it. The MTAA looks better to me, but that's just my opinion.