I wanted to thank all of you for all the lovely comments you left me here and on ravelry. You are all wonderful. Mr. D and I are getting along really well and are still having a lot of fun. I like being married, and he admitted to me the other day, that he does too.

Sahara, you had a question about Silk and how long it took me to knit her. Well, I knit the dress on #8 needles and I guess because I liked the project so much, it only took about a month to make. The handbag went a little faster. I had made the ruffles a while ago. I starched them about 2 months ago and made the actual bag, the day before the wedding. Let's just say, sometimes I like to work under pressure.

Last Saturday I got a chance to hang out with some of my knitting buddies at the annual Sit and Knit. There was a meetup in Rittenhouse Square in Philadelphia. I thought it was a nice turn out. I got to meet some new people and finally see in person some folks that I have seen on Ravelry. I thought that was cool. 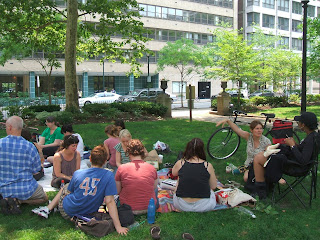 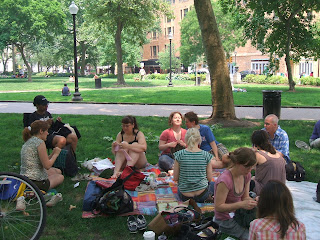 Some of my friends have had the chance to get knitting project bags from Piddleloop. They are really cute, and keep everything in place. Since they have become really popular, you can't even get one, unless you special order which is what some of my other knitting friends have done. Three different times I have gone on only to get the bag I wanted into my shopping cart, put my info in and then get told sorry, it's already been purchased. Anyway, my friend Lisa and I were talking a little over a week ago at knitting circle. She had one of the bags. I said to her, let me see the bag. She showed it to me and I said hmmmmm, I think I can copy that, and that is what I set out to do. On Sunday, I sat down at my sewing machine and made this. 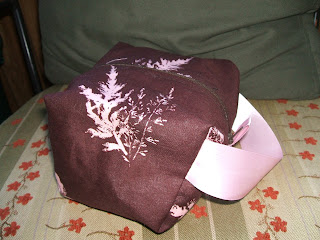 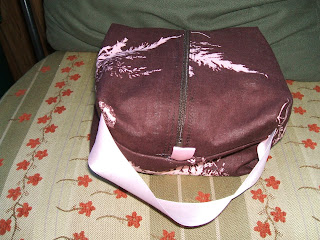 I also made a bigger one. That can hold 2 projects depending on their size. I was pretty proud of myself. I just realized though that I didn't take a picture of the inside lining. It's pink. I plan on making a few more in my spare time. Next time I think I might add some pellum to make the bags a little sturdier. Anyway, this little bag is currently carrying the left and right fronts of the minimalist cardigan. I've already finished the right front. I did the armhole shaping and am in the middle of doing the 7 inches for the armhole on the left front. I'm hoping to be done that soon and start on the sleeves.

I mentioned that I started another project on my honeymoon. It's coming along nicely and I'm almost up to the armhole shaping. The pattern is Gisele and it's from Knit'N Style August 2003. The yarn I am using is Araucania Ulmo, 100% Cotton and I'm using #4 needles. I don't have a picture of it yet, but plan to take one in the next few days.

While in Florida, I got a chance to hang out in Borders. In going through the knitting magazines, I came across this. 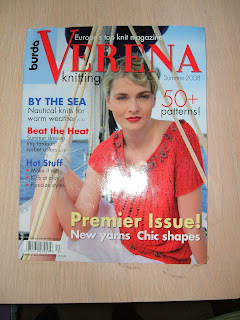 I didn't know that Burda had a knitting magazine called Verena. This was the first English issue. Supposedly it's also printed in a few other languages. In first looking through it and seeing the 50+ patterns, it reminded me of Rebecca, Sandra and Vogue magazines. I don't know as of yet if the patterns are hard to read, but I will be trying out a few. Here are just a few of the ones that caught my eye. 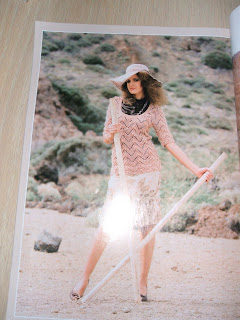 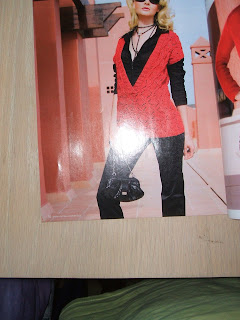 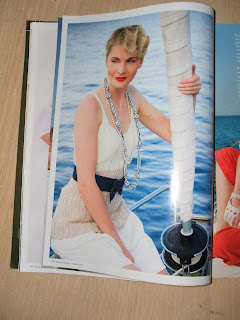 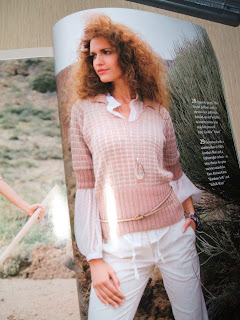 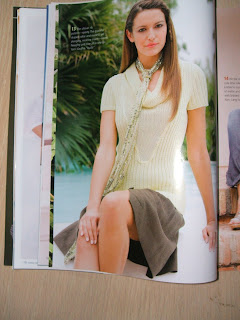 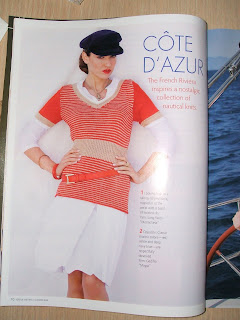 I might have a 2nd post for you today or tomorrow. I've been trying to figure out how to show some of the pictures I have and decided to just start from the beginning. Hopefully, I'll have my wedding pics in the next week or so. If not, I could always jump to the honeymoon.

Hope everyone has a lovely day.
Posted by Andrea at 9:39 AM

Darn, I wish I was in Philly for the WWKIP; I'm a big fan of Rittenhouse Park.

Gosh, you must knit pretty fast; you started that top on your honeymoon, and now you're up to the armholes? Wow!

Glad you had a fab time at the Sit & Knit. Great job on the knitting project bag. I've been knitting, but primarily on the train so my tank is taking forever...lol. You're the 2nd person to mention that magazine... I'll keep an eye out for it in my area.

Look at you, making your own piddly bag just from examining mine! Very impressive! Looking forward to seeing it in person.

Funny - I've been in a really vest mood lately myself!