Everyone I know started getting their April Burda issue last week, but my copy was no where to be seen. I had purchased my subscription through Amazon, and you know I wasn't happy. I spoke to my buddy Karen and she agreed with me that I should check things out because I didn't get a renewal notice and she stated that she didn't think Amazon did renewals. Well my friends, I was freaking out by Monday. I checked my subscription and it stated that it wasn't expired until May 2010. I put an email in to Amazon, who then transferred me to the magazine company that handled my subscription. On Tuesday I received an email back on my inquiry and I was a little upset. I found out that my subscription had been fulfilled with the March 2010 issue, which meant Ms. Andrea was not getting an April issue. Well, we couldn't have that now could me. I was on the phone yesterday morning with a quickness. I found out that Amazon does NOT send out renewals for subscriptions (bad, bad, bad BADDDDD), THANKS Karen for the heads up again. I was able to renew my subscription directly through the magazine company and they assured me that I will now get renewal notices on a yearly basis. I have also calmed down because I was able to get my April issue, so hopefully I'll see that in a few days.
In other sewing news, I finally cut out Simplicity 4256. View C. It's the beige jacket to the far right at the top.

I still need to cut the lining out. I'm hoping to get that done tonight. Then I just need to mark it up and do some thread tracing and I'm ready to go. I'm hoping to get some sewing done this weekend. We'll see.
I finished the Vera Wang skirt except for hemming. 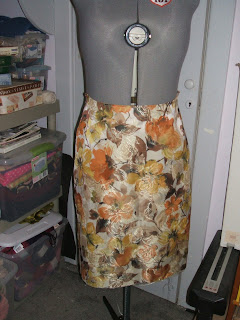 I plan on finishing that up by the weekend as well. I think I might serge and then prick stitch the hem. I haven't done prick stitching on a hem in a long time. I need to bone up as they say on my hand sewing skills.

I also finished the chemo hat that I was working on for a friend. 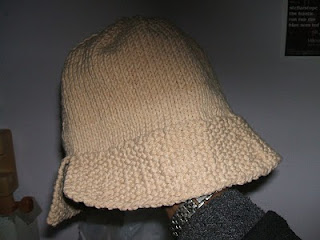 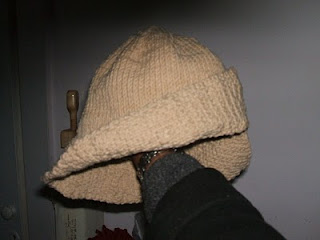 Sorry it's not modeled but I'm sure you can understand. I can tell you this, the hat is sharp when it's worn. My hairdresser saw it Friday night and now she wants one, and personally I like it too, so I guess that will be hat #3 in the works.

I started working out again a couple of weeks ago, and I'm still going strong. I've lost about 6 pounds. It's a slow go but I'm trying. On Tuesday night I took a Zumba class for the first time, and LOVVVVVVVVVVVVVVE it. I am totally hooked. It kicked my butt, and I was crying for the last 15 minutes as I wanted to quit, but there were these 2 older women in back of me, I'd say around the age of 65 and older. I wasn't quitting if they weren't. Plus the class was packed. I didn't want to leave my corner.
Posted by Andrea at 12:32 PM

Hope your Burda arrives soon! That skirt is looking good, the fabric is beautiful, and I love the hat.

Yay! Glad you were able to get your Burda! Skirt looks nice and great job on the hat!

Lots of sewing new coming from your blog and that's good. Mine has slowed up so much - I think the time change got to me. I'm so in love with your Vera Wang skirt and can't wait to see your new jacket.

Glad you were able to renew your Burda subscription and the skirt looks great. Looking forward to your jacket.

I had a similar problem with my subscription! So frustrating!

So happy you were able to quickly resolve that issue! Can't wait to see your jacket, I really like that pattern and waiting for your review before purchasing.

So THAT'S the hat. It looks great. And I'll keep your pal in my thoughts.

Glad you're enjoying the Zumba, and congrats on the weight loss. Not like your fine self needs much!!! :)